John had probably his best clinic appointment ever this week.  Our Nurse Practitioner thought he looked so good that we could even skip his scheduled echo!  He is gaining weight slowly but surely and with each passing day is gaining strength for the Glenn (thanks for those prayers!  They are working!).  All the nurses and doctors there love him and it means so much to me to hear them oohing and aahing over him.  They’ve watched him grow and thrive and really know him better than most anyone outside our family since we haven’t been taking him out much.  He has a great team cheering him on at UVA and we are so thankful for each of them.

It’s hard to believe that we are now less than 4 weeks away from the big day.  It’s a strange feeling to want something to happen and also completely dread it happening at the same time.  We know he needs it; in fact, as he’s growing, his oxygen saturations are dropping (he’s now in the low 80’s and he was in the high 80s when we came home from the hospital) which means he’s outgrowing his shunt.  But even though we know it has to happen and we want to get it behind us, it’s very hard to think about going back to the hospital and handing our dear, smiley, interactive baby over to the surgeon again.

As we’re nearing October 24, I’m going to post a specific prayer request on here every week or so.  I am convinced that the Lord loves to hear our prayers and intercession matters. We would be so honored if you would continue to go to the throne of grace on our/John’s behalf.

This week would you please pray against sickness?  As I’ve mentioned before, if John gets sick we will need to push back the surgery.  If he has any lingering congestion or anything that could compromise his airways it would make the surgery even more risky.  We need him to be completely healthy, especially in the two weeks prior to surgery, so starting October 10.   We would love your prayers for this.  Thanks for loving our cutie! 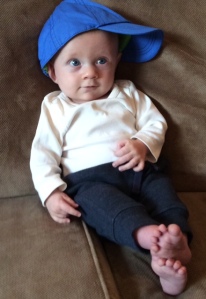 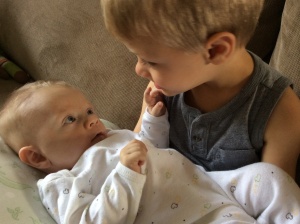 Last Wednesday, John and I had a long day at UVA Medical Center.  Due to the medicine that John must take twice a day to help with his heart function, and something called Acute Kidney Injury, which he suffered from following his first surgery, John had an ultrasound and appointment with a nephrologist to get a good look at his kidneys and then a regular appointment with his pediatric cardiologist for his heart.  I thought the kidney appointment was going to be a once and done thing but, sadly, I was wrong.  The good news was that his kidneys have grown and their function is very close to normal right now.  But the nephrologist explained that we are all born with a set number of nephrons in our kidneys.  Over time, we use them up and that’s why older people are often on dialysis; they’ve outlived the life of their kidneys.  So when you have kidney injury and/or take meds that are hard on your kidneys, you use up those nephrons. Since the oldest survivors of HLHS are only in their 2o’s and 30’s, there isn’t any information on the long-term prognosis.  She said there is no way to tell how many nephrons we have left and John will need to have yearly appointments to keep a close watch on his kidney growth and function.  She also said her team will be close by after his next surgery to make sure he doesn’t suffer from Acute Kidney Injury again.  He is at a higher risk because it happened before.

His cardiology appointment went fine.  The team continues to be unimpressed with his weight gain.  He hardly gained any weight since his last appointment two weeks ago, though he did finally break 11 pounds!  To keep him gaining and strong for his upcoming surgery, his cardiologist wants me to only nurse once or twice a day.  They want to know exactly how much he’s getting and told me to add a very small amount of formula to help increase his calories.  So I’m back to mostly pumping.  I am disappointed, but realize this is best for him right now.  I am hopeful that I can resume frequent nursing after he’s done with the next surgery and growing at a good rate.

Overall, it was an exhausting appointment, not only because I was gone from 8:45am-4:45pm that day, but also because we added another serious issue to be concerned about over the course of John’s life.  Our main focus needs to be his heart and getting him through the next surgery.  But in the back of our minds we are also thinking about his malrotation and the likely need for bowel surgery sometime following the Glenn, developmental and learning concerns due to his time in the hospital and low oxygen levels, and now we add kidney function to the list.  It’s still sometimes hard for me to believe he has all of this going on inside because on the outside he looks like a healthy (but tiny!), adorable, attentive 4 month old.  We appreciate your prayers for all of these concerns.  When we feel overwhelmed, we remember Matthew 6:34 and pray that the Lord will give us what we need for each day.  He is faithful.

Benjamin: Daddy, do you know what you need to wear when you’re weed-whackering?

Benjamin: You need to wear something on your ears.

Benjamin: Do you know why?

Benjamin: So you don’t get leaves in your ears.

I am so happy to report that John is nursing! I have been pumping 6-8 times per day, every day since his surgery. That is a lot of work for the pump (thanks again, Emma!) and yesterday morning it decided to give out. So John was forced to nurse and he took to it beautifully! Only a small percentage of HLHS babies are able to breastfeed and I am elated that he may be one of them. If it ends up being too much work for him (a cardiologist told me, for heart babies, it’s like running on a treadmill) or if he doesn’t gain weight then we’ll need to reevaluate. But so far so good. I love every minute I get to snuggle with this cutie! 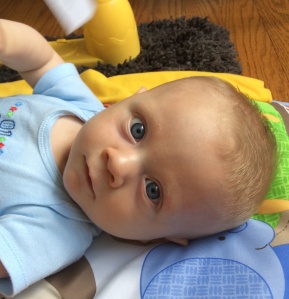 This morning, Katie started her second year of preschool!  She will go 3 mornings a week from 8:45-11:15 at a wonderful place called Community Preschool.  She loved it last year and we are confident that she will love it again this year.

When I walked Katie in to her classroom, there was a new little girl clinging to her mom.  I heard her say, “I don’t want you to leave, Mommy.”  Katie and I introduced ourselves and hung around until it was time for the parents to leave.  As I was walking out, I saw Katie take the little girl’s hand and lead her over to her favorite toys from last year, the baby dolls.  My heart nearly burst with pride!  Andrew and I talk often about how we don’t care if our kids are the smartest, most accomplished, or go to the best college.  What we care most about is that they are kind, they think about the needs of others, and, most of all, show the love of Jesus.  Katie did that this morning for a new girl who was afraid.  We are so proud of our sweet girl!